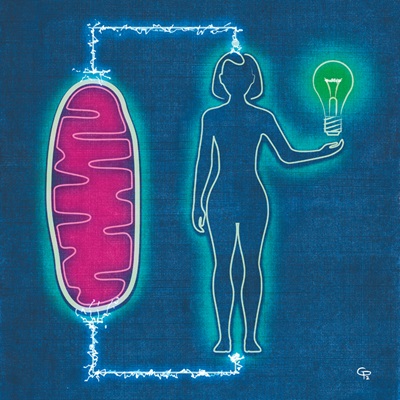 Bioenergetics involves the flow of energy throughout our bodies. The main function of mitochondria is to produce energy in the form of ATP by the process of oxidative phosphorylation (OXPHOS). When this process functions properly, our bodies normally have enough energy to keep us healthy. When this process is dysfunctional, disease can occur. For example, the brain uses about 70% of all ATP produced in our bodies. When the brain doesn’t get enough energy, problems can occur such as seizures, mental retardation, and cognitive dysfunction (i.e., brain fog).

Considering that mitochondria produce energy, mutations in mitochondrial DNA (mtDNA) can disrupt mitochondrial bioenergetics. mtDNA mutations cause a wide variety of diseases throughout the body. An example is Leber’s hereditary optic neuropathy, an inherited form of vision loss that is typically caused by mutations in complex I of the electron transport chain (ETC).

mtDNA mutations can also have positive effects on bioenergetics. For example, specific mutations and haplogroups are present more frequently in athletic people, including Olympic athletes. These mutations/haplogroups enhance bioenergetic efficiency, i.e. improve the ability to produce and use energy. People living at high altitudes also have more efficient mitochondria because they have specific mutations/haplogroups that have developed over the course of evolution to help them adapt to their surroundings. In contrast, people living in cold climates have less efficient mitochondria; they burn more calories to produce the same amount of energy (ATP), so they generate more heat to keep warm. 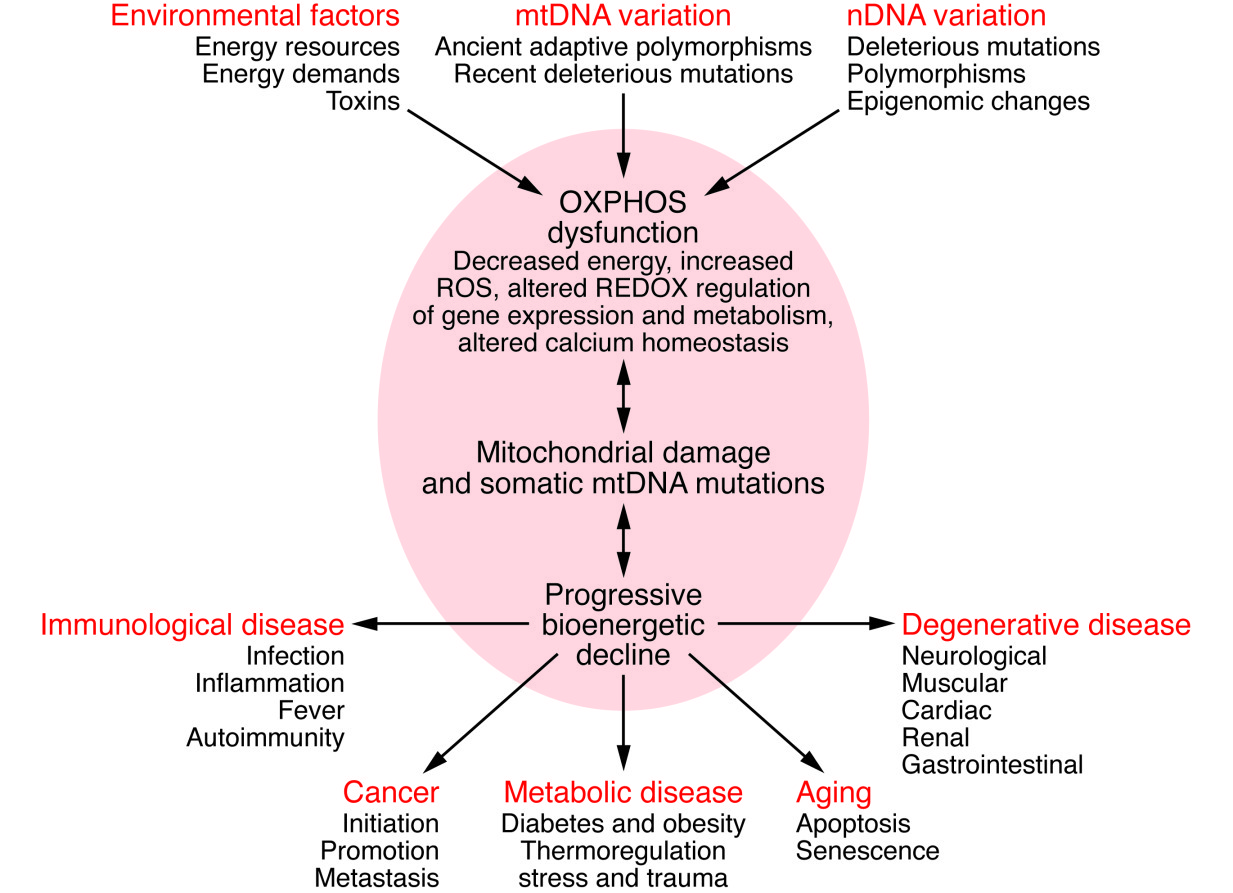 For the Scientist: Mitochondrial bioenergetics plays key roles in multiple cellular processes, including energy production. Mitochondrial bioenergetics is primarily affected by either genetic defects (e.g., nuclear or mtDNA mutations or epigenomic regulation) or environmental factors (e.g., toxins or variation in caloric availability or demand), which can have deleterious consequences. Alterations in mitochondrial structure and function caused by these genetic defects and environmental factors can impair OXPHOS, resulting in reduced energy production and a myriad of other effects. As energy output declines, disease can develop in any number of locations throughout the body.

Bioenergetic efficiencies are surprisingly different among individuals and regional locations. In some individuals, a proton gradient can be efficiently created by the ETC from caloric energy. Such individuals burn the least amount of calories to make a considerable amount of ATP (tightly coupled individuals). In contrast, some individuals have less efficient mitochondria that use reducing equivalents to generate membrane potentials less effectively. These individuals burn more calories to create the same amount of ATP. Thus, they produce more core body heat per ATP generated (loosely coupled individuals). Significant evidence suggests that the loosely coupled OXPHOS system underwent positive selection during evolution to help individuals living in cold climates adapt to their surroundings.

Mitochondria and specific haplotypes also play important roles in the hypoxic adaptation of humans to high altitude. Any type of defect or mutation that alters mitochondrial function can lead to a life-threatening condition known as high-altitude pulmonary edema (HAPE). Haplogroups/mutations that increase mitochondrial stability and reduce oxidative stress are beneficial and confer resistance to HAPE. Other haplogroups/mutations that decrease mitochondrial efficiency can have pathogenic effects under hypoxic conditions, increasing the risk of developing HAPE.