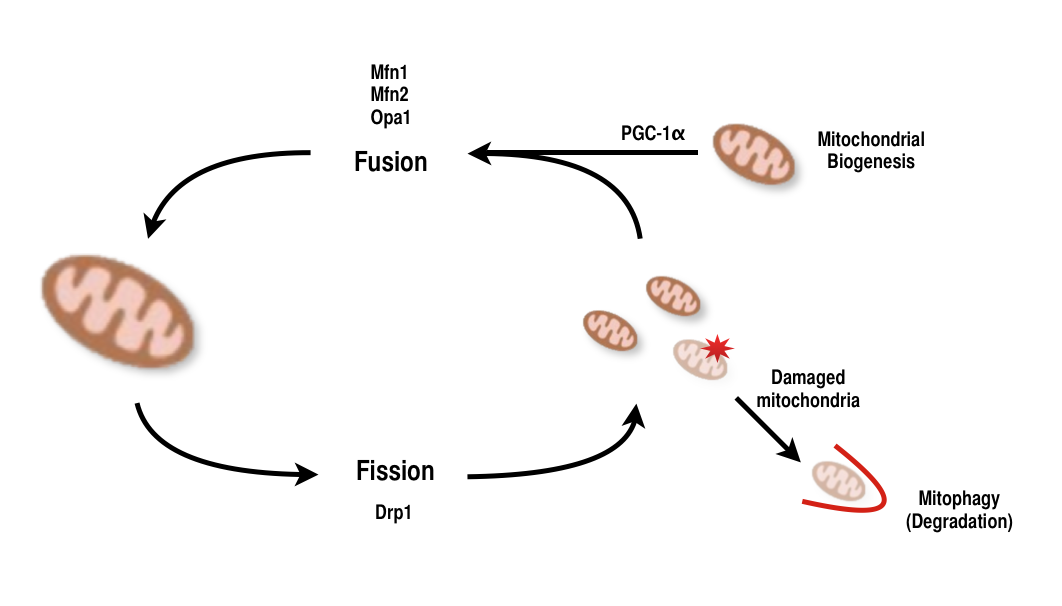 For the Scientist: Fusion allows mitochondria to compensate for one another’s defects by sharing components and thereby helps maintain energy output in the face of stress. However, when a certain threshold of damage is reached, mitochondria are eliminated by autophagy. Fission segregates the most seriously damaged mitochondria to preserve the health of the mitochondrial network, in addition to regulating morphology and facilitating mitochondrial trafficking. The highly dynamic mitochondrial fusion and fission cycle is proposed to balance two competing processes: compensation of damage by fusion and elimination of damage by fission. Failure of these stress responses may lead to neuron death and neurodegenerative disorders.

In humans, mitochondrial fusion and fission are both controlled by GTPases of the dynamin family. The process of mitochondrial fission is directed by dynamin-related protein 1 (Drp1), a member of the cytosolic dynamin family. This protein forms a spiral around mitochondria and constricts to break apart both the outer and inner membranes of the organelle. In contrast, the process of fusion is directed by different membrane-anchored dynamin proteins at different levels of the mitochondria. Fusion at the level of the outer mitochondrial membrane is mediated by Mfn1 and Mfn2 (Mitofusins 1 and 2), and fusion at the level of the inner mitochondrial membrane is mediated by Opa1. Several studies have demonstrated a correlation of increased mitochondrial respiratory capacity with Mfn1, Mnf2, and Drp1 gene expression after endurance exercise. This evidence indicates that reorganization of the mitochondrial network in muscle cells plays an important role in the response to exercise.